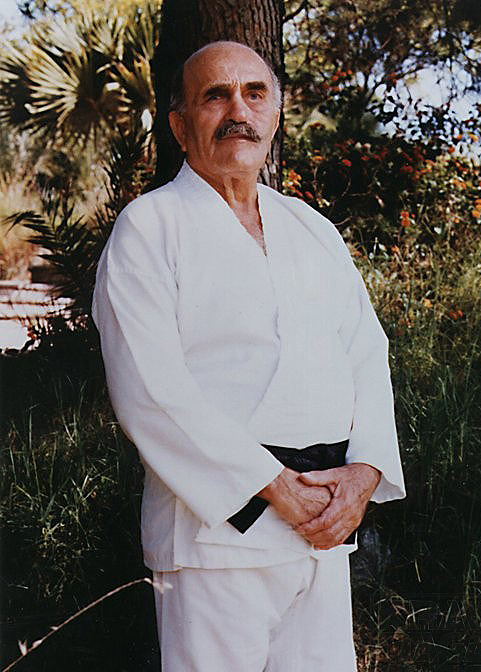 Imrich (“Imi”) Sde-Or*, founder of Krav-Maga, was born in 1910 in Budapest, which at the time was one of the centers of the Austro-Hungarian Empire.

He grew up in Bratislava, the capital of Slovakia, in a home where sports, law, and Central European education were equally respected.

Samuel Lichtenfeld, Imi’s father, was undoubtedly quite a unique figure. At age 13 he joined a traveling circus, and for the next 20 years engaged in wrestling, weightlifting, and various demonstrations of strength.

For him the circus was also a school, where he met people involved in a wide variety of sports. These people taught Samuel what they knew – including various martial arts

With his father’s encouragement, Imi became active in a wide range of sports. He first excelled in swimming, and subsequently in gymnastics, wrestling, and boxing.

In 1928 Imi won the Slovakian Youth Wrestling Championship, and in 1929 the adult championship (in the light and middle weight division).

That year he also won the national boxing championship and an international gymnastics championship. During the ensuing decade, Imi’s athletic activities focused mainly on wrestling, both as a contestant and a trainer.

In the mid thirties, conditions began to change in Bratislava. Fascist and anti-Semitic groups appeared, determined to upset the public order and harm the city’s Jewish community. Imi became the un-crowned leader of a group of young Jews, most of them with a background in boxing, wrestling, and weightlifting. This group attempted to block the anti-Semitic bands from entering the Jewish quarter and wreaking havoc there. Thus, between 1936 and 1940 Imi took part in countless violent.

In 1940, having become a thorn in the side of the anti-Semitic inclined local authorities as a result of his activities, Imi left his home, family, and friends and boarded the last immigrant ship that succeeded in escaping the Nazis’ clutches. The vessel was an old riverboat named Pentcho, that had been converted to carry hundreds of refugees from Central Europe to the land of Israel (then called Palestine).

The gripping story of the Pentcho and its passengers is told in detail in the book Odyssey by John Birman (published by Simon & Shuster, New York, 1984). Imi’s private odyssey aboard that ship and afterwards, which was filled with thrilling episodes, took about two years.

In 1944 Imi began training fighters in his areas of expertise: physical fitness, swimming, wrestling, use of the knife, and defenses against knife attacks. During this period, Imi trained several elite units of the Hagana and Palmach (striking force of the Hagana and forerunner of the special units of the IDF), including the Pal-Yam, as well as groups of police officers.

In 1948, when the State of Israel was founded and the IDF was formed, Imi became Chief Instructor for Physical Fitness and Krav-Maga at the IDF School of Combat Fitness. He served in the IDF for about 20 years, during which time he developed and refined his unique method for self-defense and hand-to-hand combat.

After he finished his active duty, Imi began adapting and modifying Krav-Maga to civilian needs. The method was formulated to suit everyone and anyone in order to save their lives, or survive an attack, whatever its nature, whilst sustaining minimal injury. To disseminate his method, Imi established two training centres, one in Tel Aviv and the other in Natanya.

Even during his last years, Imi continues to personally supervise the training of those who have attained high ranks in Krav-Maga, and to spend time with the instructors in Israel and abroad. Imi monitored the trainees’ progress and achievements, captivating them with his personality and imparting them with his knowledge and unique personality.

Imi, a teacher, a fighter and a great human being, passed away on the 9th of January 1998, early in the morning, in the hospital, after 100 year we  are celebrating his birth with events to remember his legacy.