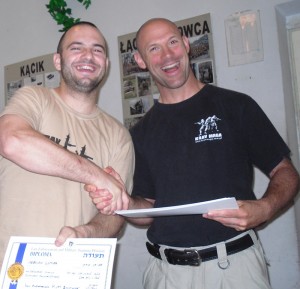 Krav Maga System UK was established by Adrian Siman in 2006 as part of the Transilvania School of Krav Maga. The first school was opened in London in 2006.

We now operate 2 schools and we are based in Liverpool and London Waterloo. We also have our sister school – Krav Maga System Italy.

We are a team of 2 instructors and several trainers, providing the lessons at these schools. Classes are available for beginners, intermediate and advanced students. There are also specialist classes for Kids based in Liverpool

The core values of Krav Maga System UK are Discipline, Respect, Confidence and Courage which are evident in the training sessions and which students also take out into their everyday life.

Adrian started his interest in Martial Arts at an early age with Shotokan Karate and then trained in Kick Boxing before discovering Krav Maga. He has trained and qualified with some of the top instructors in the world, who can trace their roots back to the founder of Krav Maga, Imi Lichenfeld.  He has achieved the level of Expert and is one of a small number at this level in the UK and also had formal qualifications in Women’s Self Defence, Children’s Self Defence and Law Enforcement

Krav Maga System UK is affiliated to international organisation “Protect” which is run by Itay Gil who was amongst the first students to train with Imi Lichenfeld. As the name of the organisation suggests, the fundamental aim of Protect is to protect the core principles of Krav Maga, keeping the purity and effectiveness of the skills and passing them on to new students so that we can all adhere to the ethos “So that one may walk in peace”